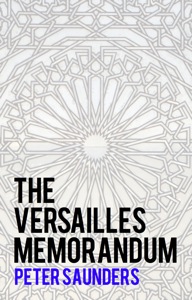 Today’s big story is that Osama bin Laden is dead.

If you’re already feeling a pang of loss at the West’s major enemy now being kaput, keep a look out for our new thriller out this month.

The Versailles Memorandum, by noted liberal intellectual Peter Saunders, is a dystopian future history where significant portions of Western Europe have come to be ruled by Sharia law. In it, bin Laden survives to becomes the president of the Islamic Republic of Arabia in 2017, and continues to terrorize the West.

The novel, Saunders’ debut, will be available for the Kindle and other mobile devices on the Amazon store later this month, with an iBooks release to follow.

Founder at Hourigan & Co.
Ben Hourigan is an Australian-born novelist and freelance editor. His novels Kiss Me, Genius Boy (2011) and My Generation’s Lament have been Kindle bestsellers, reaching #9 and #10 in the World Literature > Australia & Oceania category. Since 2013, Ben has worked full-time at Hourigan & Co. while writing his third book. As Hourigan & Co. grows, Ben continues to work with businesses and institutions while cultivating a growing practice in editing, publishing, marketing, and mentoring for self-published authors.